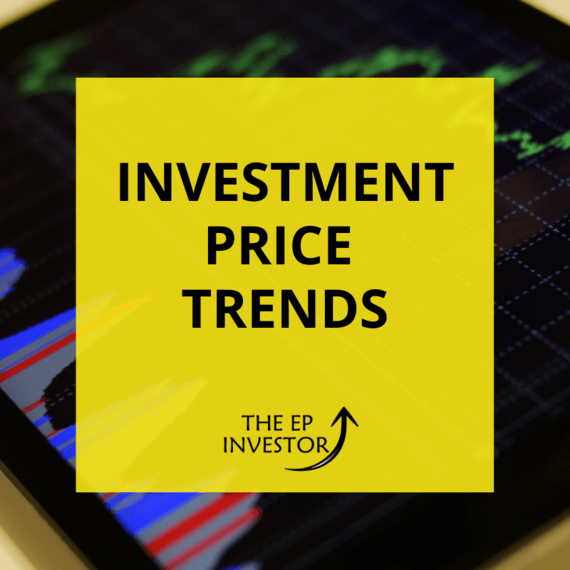 So I did a post on Facebook the other day about the ebb and flow of the price of investments, and then went into a bit more detail for a few emails on my list. So thought it was such a useful topic that it’d be good as a blog.

If you don't want to miss these kind of things, then sign up to my email list at the bottom of the page.

So we're going to look at the technical ways the stock market goes up and down, while it's going up and down.

What am I on about?

Check this image out I picked HSBC over the last 5 years, mostly for the lols, but I could have gone for any company, any index, commodity, currency, etc.

The yellow line is the 50-week simple moving average (50SMA). Does as it says, takes the price of the last 50 time periods (in this case weeks), and plots the price on the chart.

What have I drawn on it? See all those ellipse shapes? They indicate when the price starts to do the opposite of the overall trend. So the first two on the left are under the yellow line. Price is bearish and generally going down. Within the white circles, price starts to go back up again. But it fails, and then continues going back down.

The purple rectangle at the bottom is a consolidation point. So price is going down, tries to go back up - fails. Tries again, fails again - but notice that when it failed again it didn't go as low as the last failure? That was the signal that the bearish trend was over. Price then rose, went above the yellow line, and we were away to the races in a bullish trend!

That purple rectangle would have been a great time to buy into this particular share.

Then the same pattern repeats. Generally, the price is going up, with occasional pullbacks, then the upward price trend continues. At the top of the price - sometime end of 2017 / early 2018 we see another consolidation phase. Price goes up, fails, goes back up again, but doesn't make it as high (the highest white circle). It then - just cos the market does whatever it wants - goes a little bit higher, but then starts to fall.

If your eyesight is good, you'll see one little green candle as it starts to drop. But it doesn't go very high. Then the price drops under the 50SMA and the bearish trend starts (price is going south). There you go, cos I love you and want to save your eyesight. Notice how the next white circle shows price going the opposite direction to the trend, but the highs don't get as high as they were previously before they drop back down again. That's a good bearish sign.

Why does this matter?

Now - THIS IS NOT FINANCIAL ADVICE. As you can see from these charts, there are times when the prices just keep moving (up or down) for quite some time and with only small pullbacks or bounceback.

All wavey and the such.

But why does this happen?

Mostly it's psychology. But with a tiny bit of technical necessity thrown in as well. Some old guy in the 1930's (mad that we're not that far from the 2030's), came up with this idea that stocks go up in waves - the Motive Phase. And then come back down in waves too - the Corrective Phase.

Now this is where I have an issue with subjective technical analysis like this. There are 3 ups and 2 downs. But sometimes there will be 4 ups and 2 downs, or 3 ups and 3 downs, or 5 ups and 3 downs...
And fans of Elliott Wave theory will say that it still proves their point... just that there was an extra one. Doesn't really help when it comes to knowing when to buy or sell though does it? BUT, the reason these patterns occur comes down to human emotion.

With things like this, if it's well known enough (and this one is), people will trade it on the basis of it's happened before so it's probably going to happen again. Our financial system is based on confidence. So if you're confident that everyone will do a certain thing at a certain time, then you join in, and that confidence and people joining in makes it a self-fulfilling prophecy.

We didn't need to, but if you thought someone else was going to, then you wanted to get in before them so you had some. Which meant supplies ran low. Which made people rush to buy more. Which completely depleted supplies. The confidence that people would stockpile resulted in stockpiling.

Is our entire financial system really that stupid? Yes. Yes it is.

There's another reason for the wave patterns though.

So you now know prices go up in waves, and they do because of humans being predictable little creatures who want to profit (are greedy) but are also afraid of losing money (are fearful). And those two things control pretty much every single human endeavour.

But now we're going to throw in some technical points. First one is Price Points. There's probably a better word for this, but I'm using it to cover a bunch of different things. Not sure how good your sight is, or if you can click on this and make it mucho biggero, but those yellow lines I've just put at major price points.

So at $1300, all of a sudden there are a bunch of people selling at that price, so when the price moves up to $1300, tonnes of gold becomes available - increasing supply - which reduces the price back down to below $1300 (or keeps it there for a while until all the supply is gone).

So as price drifts down to $1450, loads of buy orders are triggered and the demand for gold increases. That keeps prices above $1450, or at $1450 until all the buy orders are filled.

It happens with everything. Go check it out.

How does this come in handy?

If price is getting close to a nice big round number - either on the way up or down - then there's the potential that it will find support or resistance at this price point.

It might take a while to break through it, and you might see a bunch of tests at that price.

Big round numbers are one form of support and resistance lines, but there can be other ones as well. You'll hopefully be able to spot them on a chart when you see the price bounce up and down and all around a particular price level. Who knows why. But if it's historically proven to be a level that the price has stuck at, then it could well happen again in the future.

Some people use Fibonacci lines (I personally think they're bullshit), but it's another way to draw lines on and see potential retracement levels for future price movements. If you've paid attention to my previous stuff, you'll know I'm not a fan of trying to time the market.

As Ana loves to remind me;

"It's about time in the market, not timing the market." But even so, the goal is to make you the best possible investor with the least possible effort. So being able to quickly check on a chart and see what might be up the road in the next few days or weeks never hurts. I wouldn't let it change your strategy, but it might make you tweak it.

These finer points are what my lovely 1-2-1 clients get all day e'er day. So, stop being a cheapskate and sign up here.

Next topic is looking at position covering. It's the financial equivalent of taking your ball home.

But what does it mean? Weird aside, but the DJIA or Dow, is made up of just 30 companies that are meant to try and represent the entire US economy. Apple is the only major one that makes the list. No Amazon, Google (Alphabet), Netflix, Facebook, Tesla... so it's not really that much use as a bellwether. But still, it's heavily traded and used a lot when describing the US economy.

You know that prices move up and down while moving up and down. You know they can stall around certain prices for weird, psychological reasons.

But what technical reason is there for these pullbacks?

Tis all about your friendly neighbourhood trader. Let's call them Bob.

I've covered this before, but to short a thing, you basically agree to sell it to someone at today's price in the hope it becomes cheaper so you can buy it later and make a profit on the difference.

So Bob and pals are merrily buying and selling things in the direction of the trend. But at some point they want to take their profits. And it goes a little something like this... The white circles are where the traders enter their trades. In this case, it's a short, so they are selling the Dow Jones.

Bob agrees to sell shares in the Dow Jones to Mr Pension Fund at the price inside the white circle, 29200. Bob is hoping it'll drop in price, and when it does, he wants to take some profit. So in the green circles Bob wants to close his positions. He has already agreed to sell Mr Pension Fund the Dow for 29200, so he now buys the Dow at 25200 and pockets 4000 as profit.

Because Bob has come back into the market, he's buying a lot of shares now. So the demand for the Dow has started to go back up, and because he's going to make 4000 profit, Bob is happy paying between 24800 and 25600. He's still making a healthy profit. His buying activity stops the decline in the price because there are now more buyers than sellers. So prices move back up (or at least stop declining). But once Bob has closed his position. He's now sat on a bunch of money and he wants to go again!

So he does, in the white circle part.

Some of his trader mates might have missed out on the chance to exit when Bob did, so they start taking their profit in the next green circle a few days later. Hence the small little bounce. Then Bob and chums pile back in to go make more profit! It happens a few times, and the last time it happens, that's most of the "smart money" exiting the trade and moving on.

The pink rectangle is lots of choppy later comers not really knowing what they are doing. When someone makes money in the stock market, someone else has to lose money. It's a zero-sum game.

So you might be wondering who is buying the Dow at 29200 and then selling it at 25200, and then having seen it just drop 4000... is still willing to buy it at 25200 and then sell it at 18200 a few weeks later? I was going to cover in more detail the other side of the trades, and why people are willing to buy and sell at the time Bob wants them to... because sometimes they don't.

But I'll just be a tease and tell you that if you're in my Masterclass or work with me 1-2-1, I'll tell you. Otherwise... unlucky.

Find out more about my Masterclass

Investment Price Trends
Alternative Investments
Why Invest in Commodities
Should I Invest in Funds or Shares?
Login
Lost Your Password?